If you like playing bocce ball, you won’t need to try to find a court near you. Just use these simple DIY instructions to build a bocce ball court in your backyard.

With warm weather around the corner, everyone’s attention is turning to outdoor activities. One sport that everyone in the family can participate in no matter their age is bocce ball. Humankind has played this game for centuries in some parts of the world. Now you can play it at home by building a bocce ball court in your backyard.

How to Build a Bocce Ball Court in 7 Simple Steps

While building a bocce ball court takes a lot of work, it’s easy to do with some planning and a little help. In fact, for the avid player, it’s the perfect outdoor DIY project. Here’s how to do it in just seven simple steps.

A regulation bocce ball playing surface measures 13 feet wi​​de by 91 feet long, which is longer than most backyards. Most lawns in America, approximately 60% of them, are about 0.225 acres. About 20% of those lawns have solid surfaces for driveways, sidewalks, or patios. A 91-foot court for bocce ball will be much too long for most households.

Fortunately, you don’t need a regulation size court to enjoy the game. In fact, you can scale it down to a size that better suits your yard. A good size court for most lawns will be about 10-feet wide by 60-feet long. However, the court can be any size that best fits your property.

When you figure out the size of the court, you can start plotting it. Start by driving a stake in the ground for the first corner. If you’re going to edge it with lumber, add the dimensions of the lumber to the court. So, if you’re going to use 4” x 4s” for the court’s sides and ends, add eight inches to the width and length of the bocce court when plotting it. Using 2” x 4s” would work as well, but you may wish to double them to create a distinctive court border.

After driving the first stake, measure the length of one side, which would be 60’ 8” and drive another stake for the second corner. Tie a string around the tops of the two stakes to help you mirror the dimensions on the opposite side of the court.

3a. Mark your turf

To make it easier to dig, use turf-marking paint to spray along the string, so the lines are even and straight. Then, you can remove the strings to start digging trenches in which to install the wood border. We strongly recommend that you build the court slightly above ground to avoid water pooling on it when it rains.

3b. Cut your lumber

Before you dig the trenches, cut the lumber to size. The length of a 2”x 4” or 4”x 4” is typically eight-feet long, but you can buy them in 10’ lengths at most lumberyards. Call ahead to the lumberyard or home improvement center to order the 10′ boards to ensure they are in stock. If you have a circular saw, you can cut them to the proper length or width for the bocce ball court, or you can have the lumberyard do it for you.

While digging the trenches for the lumber, set aside the soil nearby. This way, you can use it to hold the boards in place for the framing. you can then put the side border boards in the trenches. For a 60’ long court you will lay six of them end to end. Use two-inch wood screws to attach the boards from inside the court to stabilize them.

As the ends of the bocce court are 10’ wide, you only need two boards for each end. If you’re using 4”x 4s,” then you would stack them on top of each other. With 2”x 4s,” they would be stacked next to each other to form a 4” border. Using wood screws, secure the ends from the outside of the court.

Once you’ve framed the court, you will need to prepare the area for the surface you want to use. A bocce surface can be almost anything, including:

While many players prefer crushed shell surfaces, they can be expensive because the material needs to be imported from the east or west coast. If you live in the center of the US, grass or clay will cost less for the court.

The bocce court will consist of three layers of organic material, plus a layer of geotextile fabric. The fabric allows water to drain through it but keeps plant roots from sprouting beneath your court’s surface. It will be laid on top of the court’s first layer.

5. Lay Down the First Layer

The layer of material that covers the ground should be coarse, and it will be about three to four inches deep. A good choice is a crushed stone as it will allow for water drainage and help create a firm surface for the bocce court. Many people use one-inch crushed stones, which need to be compacted before laying the fabric on top of them.

The second layer of material should be finer than the bottom layer, but half as deep. Smaller crushed stone or gravel works well for this layer, which should be about 1 ½” to 2” deep. Compact this layer as well so the layer above it will be level.

7. Apply the Third or Top Layer

The surface layer can be any of the choices above like clay, crushed shells, or grass being among the most popular with avid bocce ball players. However, and works well too and is probably the least expensive choice. The only problem with sand is it will need to be constantly raked to keep the surface smooth.

Grass could be problematic as well because it will need to be cut on occasion unless you use artificial turf. No surface lines are needed on the court, so once the top layer is laid, you are ready to play bocce.

Here’s the DIY Network’s take on how to build a bocce ball court. They chose to use concrete for the surface, but you can also use grass or gravel.

How to Build a Bocce Ball Court: Materials List

Assemble a list of the materials you need to create a bocce court before going to the lumberyard or home improve​​ment store, so you don’t forget anything. While you don’t have to double up the 2” x 4s” — if that’s what you’re using — we advise it. By doing so, you’ll l create a four-inch border that will be sturdier than one that is just two inches wide.

To build the court you will need:

Building a bocce ball court shouldn’t take more than a day if you have everything that you need. While you can calculate the amount of aggregate that you need for the court online, have someone at the home improvement store double check your calculations to ensure you don’t buy then you need if this is your first DIY building project.

Now, you can buy some Bocce Ball Sets 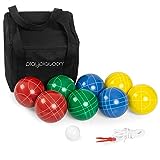 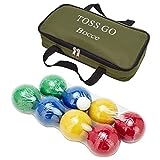 Of course, without bocce balls, you’re not going to be able to play on your new court. You should be able to buy bocce ball sets at a sporting goods store, or you can go online to choose from several different sets. There are cheap sets that includes:

There are also sets made in Italy, some of which come with eight balls in four different colors and a nylon bag to take them to another court.

Once you have the bocce court and your balls assembled, you can teach your family and friends to play and enjoy many days competing against each other. And with everyone hanging out and traipsing in and out of the house, You may like these cleaning hacks.

Join Our Community
Check Out Our Videos